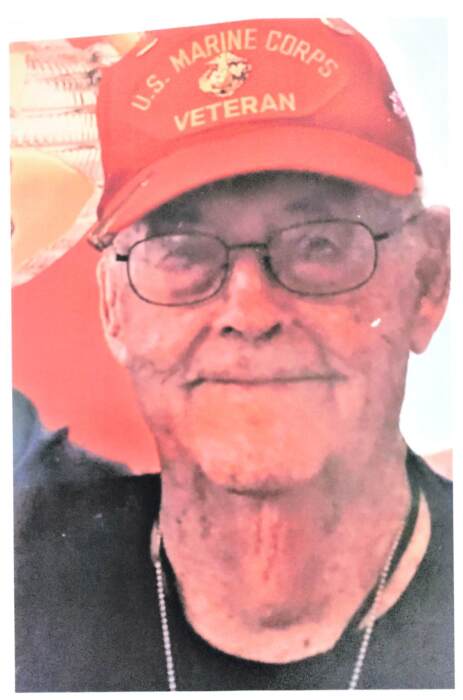 Robert Francis “Bob” Walker, 101 years of age and long-time resident of Diamondhead, MS passed away on Monday, May 2, 2022, at his home.

Those who remain to mourn his passing include his current wife, Kathleen Walker, his stepchildren, step grandchildren and a huge family of Marines.

He was preceded in death by his first wife Betty Walker, his son Robert Francis “Skip” Walker II and his parents, Joseph and Jennie Walker.

On June 25, 1920, Bob was born in Spokane, Washington.  For many, these were difficult times, and it became necessary for Bob’s father to “ride the rails” south to the San Francisco Bay area where he found work.  Soon afterwards, when Bob was about 7-years of age, the rest of the family relocated to San Francisco where Bob spent his childhood, attended school and junior college.  When he was 20 years old, he asked his father if he could borrow the car.  He and Betty drove to the airport and then flew to Las Vegas where they began a marriage which lasted for more than 50-years.  Robert Francis “Skip” Walker II was their only child.

During the early years, Bob worked as a shipyard journeyman, delivered milk and worked in a bakery but with the war raging, Bob made the decision to join the Marine Corps, a decision that would change his life forever.

After completion of boot camp in San Diego and training at Camp Pendleton, Bob was sent to the Pacific Theater with the 4th Marine Division.

On the 19th of February 1945 on an otherwise almost insignificant island southeast of Japan, one of the bloodiest and most fiercely fought battles of World War II began.  During the next five weeks, nearly 70,000 Marines battled an estimated 21,000 entrenched members of the Imperial Japanese Army for control of this pork chop shaped island only five miles in length, three miles at its widest point and dominated at its narrowest point by the now famous Mount Suribachi.

Bob was one of the Marines who fought on Iwo Jima until the 4th of March 1945 when he was severely wounded by grenade shrapnel.  He was evacuated to Guam for surgery then moved to Hawaii for further treatment and finally transferred back to California where on September 28, 1945, Bob was medically discharged from active duty to begin his life anew.

For his service as a Marine, Bob was awarded the Purple Heart Medal, Asiatic Pacific Campaign Medal with star, the American Campaign Medal and the World War II Victory Medal.

After reentering his civilian life and rejoining his family, Bob began a career with the California Department of Motor Vehicles where he eventually retired from a position supervising some 80 other DMV employees.

After retirement and at the urging of their son, Bob and Betty relocated to Diamondhead, MS where they enjoyed cruising as well as the local amenities.

Although sadness came into Bob’s life with the death of his wife of 50-years, Betty and the death not long afterwards of his only son, Bob was also fortunate to have found Kathleen with whom he was able to spend his final years.

If asked, Bob would say that the day he was released from the Marine Corps was one of his happiest.  However, he will also tell you that his time in the Corps defined his life.  He had proudly served our country and always said, “Once a Marine, always a Marine.”

The graveside service will be on Tuesday, May 10, 2022, at Biloxi National Cemetery ay 11:00am.  Riemann Family Funeral Home, 9113 Kiln Delisle Rd, Pass Christian is serving the family.

To order memorial trees or send flowers to the family in memory of Robert "Bob" Walker, please visit our flower store.