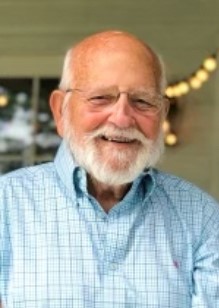 John Clyde Bauler Jr, age 93, affectionately known as “Honey” passed away peacefully the morning of May 21, 2022 with the love of his family surrounding him.

John was born to parents, John Clyde Bauler Sr and Imogene Butler on September 16, 1928 in Pensacola, Florida. He graduated from Gulfport High School after moving to Gulfport from Pensacola. He served five years in the US Navy after graduation. In 1950, John married Mellie Hardin “MeMe”, and they celebrated fifty-five years together. He leaves behind two daughters; Brenda (Jerry) Lampley and Cindy (Joe) Langenbacker and five grandsons, Ashton (Rachel) Burks, Landon (April) Burks, Wesley (Christina) Burks, Joshua (Alexis) Lampley, and Jeremy Lampley. His great-grandchildren are Brody, Gentry, Hudson, and Truett Burks and Madeline and Maren Lampley.

John was preceded in death by his parents, his wife, his son Marty, and his sister, Genie Chew.

John was a seventy year member of First Baptist Church in Gulfport where he served as a deacon, a choir member, a leader of committees, and a Sunday school teacher.  After retiring from Keesler Air Force Base as an electronics instructor, John was able to involve himself in his greatest passion, his FAMILY. His life revolved around his children, his grandsons, and his great-grandchildren. He did his best to never miss a baseball game, golf tournament, school play, or family barbeque. He would do anything to please his family, such as wear a Halloween costume or a Christmas “tacky sweater”.  The memories he created with his family will be forever treasured.

“Honey” and “Meme” shared interests in gardening. They took great pride in designing and planting colorful flower beds that created a beautiful yard. Another hobby they shared was dancing. On any given weekend they could be found on the dance floor, dancing country western, ballroom, or “down in the bayou” dancing cajun.

The family would like to thank the staff of Seashore Highlands in Gulfport, who were there in our time of need. The staff made our Dad, Honey, comfortable and secure in his last months of life.

To order memorial trees or send flowers to the family in memory of John "Honey" Bauler, Jr., please visit our flower store.