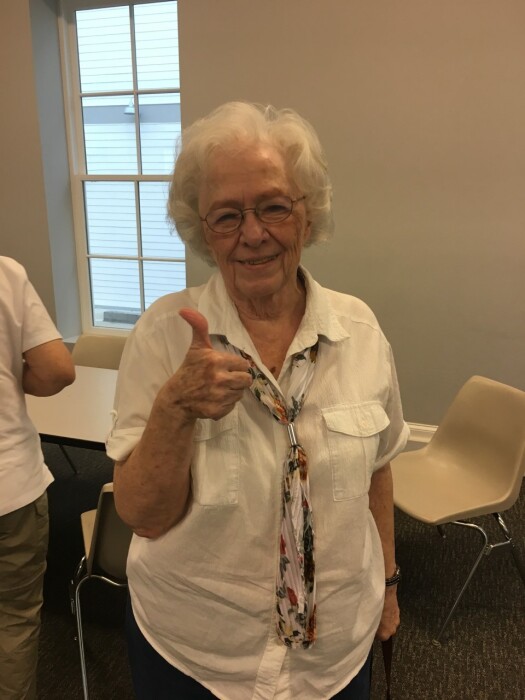 Jessie Morse Heitzmann’s (“Pee Wee” to members of her family) life’s journey ended on November 19, 2022, at the age of 88.  Jessie was born on October 13, 1934, in New Orleans to Jessie Morse and Raoul Herbert, and grew up there.  She graduated from Sophie B. Wright High School and in 1956 graduated from Tulane University with a bachelor’s degree in physics.  After college graduation she met and married Martin Heitzmann and they had three children.  In 1966, the family moved to northern Virginia and Jessie had a successful career with Virginia Power.

She was preceded in death by her parents; her husband; her daughter, Joanne Main; and life-long friends, Chumsey VanCourt, Billy Bourdin, Tom Bourdin, Barclay Wagner, and Charlie Bates.  Her best friend Byron Ladner passed away a few years ago and left an unfillable hole in her heart as they were inseparable.  One can’t help but believe that there must have been a joyous reunion in Heaven as they all gathered to welcome Jessie to the party by the seawall.

During the carefree days of her youth in the late 1940s and 50s, Jessie spent summers with her Aunt Alice and Uncle Dick Wagner in the Pass. She remembered fondly days spent at the NOLA Apartments and in the apartment at 503 Scenic.  It was during these times that she made friends and spent times together enjoying bonfires; shooting BB guns; relaxing by the seawall and in porch rocking chairs with her aunt; walking the moonlit streets; hanging out at Howell’s coffee/ice cream shop; and watching the big screen in the darkness of the Avalon Theatre.

It was also during these summers that she fell deeply in love with the Pass.  As with so many—the Pass made an indelible impression on young Jessie and her tug on Jessie to “come home” remained strong through the years.  She was so fond of saying, “A person might leave the area, but wherever they go the Pass goes.  The Pass is where they wanted to be all along.”

Years later, upon planning to retire from Virginia Power, the tug of the Pass became stronger and stronger.  After visiting the Pass once again, Jessie decided to make a permanent move to the Pass.  When she bought her home, she felt truly that she was home.

Jessie reunited with the wonderful summer friends of years past and they remained friends for the rest of their lives.  In addition to keeping old friends, Jessie involved herself in activities and organizations which piqued her interests.  In these activities, she connected with people who had similar interests and her circle of friends widened.  She was intensely dedicated to the projects to which she committed—the Lighthouse Committee; the Pass Christian Historical Society; the Old Town Library restoration and inventory; Friends of the Library.  Like her mother, Jessie had a background with ghosts.  She was very interested in the paranormal world and its involvement in the culture of New Orleans and the Mississippi Gulf Coast and was an avid reader and watcher of paranormal topics.

During these years she became acquainted with Billy Bourdin.  Billy, a “snipper,” armed with scissors, paper, glue, and tape, for years had snipped, inventoried, and saved all information on the Pass and her families.  Jessie, too, had a passion for history and its preservation—especially the Pass.   She loved Billy’s “holding court” in the plumbing shop where there were always a variety of people dropping by and swapping stories—the actual truth of the stories had to be judged by listening ears.   Jessie, who in her 70s taught herself the ins and outs of digital media, became interested in taking this great body of work and putting it in digital form.  She and Billy worked tirelessly to computerize the volumes and volumes of printed material.  Then in August 2005, Hurricane Katrina roared towards the Pass.  Jessie secured her home, gathered up important possessions, and tucked the discs holding the Pass history into her suitcase.  Katrina did not spare Jessie’s home or Billy’s shop where all the “paper volumes” were stored.  The devastation in The Pass was catastrophic—so much was gone--but her history was safely stored on Jessie’s discs.  After Katrina, during the rebuilding of her home, Jessie spent untold hours repairing photos and electronically saving the history to allow generations to enjoy the past of the Pass.  She generously donated the volumes to individuals who had lost their families’ histories and to the Pass Christian Historical Society.  Due to her body of work, she was recognized by the Pass Christian Rotary in 2011 as Pass Christian’s Outstanding Citizen.

Amid her computer work on the Pass’s history, Jessie was a prolific and insightful poet.  Awakened in the middle of the night with an idea, she would rise and work on the words until the picture in her mind’s eye was complete.  She wrote hundreds of poems on a myriad of topics from the mundane “Gnats” to poems about family, friends, and of course her beloved Pass.  She used her pallet of words to paint the Pass and all her treasures in colors and emotions which transported the reader to the beach, a sunset, the park, and all the other entities that makes the Pass—"the Pass.”  In addition, she researched and wrote several autobiographical books and a book focusing on two Civil War brothers who were distant relatives.

She loved her family and was a good friend to those privileged to know her.  She was honest in her opinions and would openly discuss topics.  She enjoyed eating out with friends and was on a perpetual search for the best bowl of gumbo.  During this search, she discovered the good, the passable, AND the ugly.  She loved to craft, making miniature Christmas trees and duplicates of co-workers’ desks so detailed that they amazed the observer.  She enjoyed the How-To classes with friends, although the painting activities were not her favorites.  She loved researching her family’s history.  She was a wonderful reference, and generously shared her knowledge when someone - stranger or friend - had a question about the Pass or a Pass family.

Her passing was a surprise to many.  In this journey, as with all aspects of her life, Jessie knew exactly what she wanted and how she wanted to live her life.  She met life on its terms and had a peace about herself in the decisions that she made.  Those of us who knew this incredible woman are better for knowing her.  Thanks to Jessie, her love of life and her striving to make a lasting difference to so many is her legacy.  She is missed.

A graveside service at Live Oak Cemetery, Pass Christian, will take place at a later date.  Riemann Family Funeral Home, Long Beach, is serving the family.  An online obituary may be viewed and memories shared at www.riemannfamily.com

To order memorial trees or send flowers to the family in memory of Jessie Heitzmann, please visit our flower store.