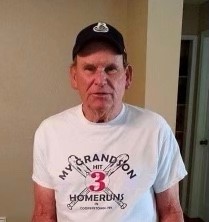 Don’s most cherished moments was spending time with his family and all of his grandchildren.  He will be well remembered for coaching Little League Baseball especially the Dellenger’s Team, and coaching PeeWee football for the Bronco’s as well.  He will be dearly missed by all who knew and loved him.

A visitation for friends will be held on Friday, June 24, 2022 from 12:00 p.m. until the 2:00 p.m. prayer service at Riemann Family Funeral Home, 13872 Lemoyne Blvd., West Jackson County.  A procession from the funeral home to Southern Memorial Park Cemetery will immediately follow the service with full Naval Honors being presented at interment.

A gathering for family and friends will be held at Blessed Francis Xavier Selos Catholic Church in the Parish Hall following the interment.  Anyone wishing to drop off food can do so after 1:00 p.m. at the Church parish hall.

To order memorial trees or send flowers to the family in memory of Don Parks, Sr., please visit our flower store.