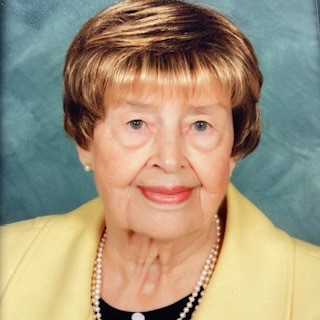 She was proceeded in death by her loving husband of 42 years on January 14, 1994, Ernest "Ernie" P. Mosley; her parents, George and Clemmie Croley; her brother, Haywood Croley, and her mother-in-law, Emma Parrish.

Bobbie was born on April 29, 1934, in Greenville, Alabama to loving parents, George and Clemmie Croley. Raised on a small farm where she soon learned the enduring values of belief in God, community, and hard work. On May 3, 1952, she married Ernie Mosley, with whom she traveled the world as a military spouse, raised a family and realized her passion for loving and educating children.  During the family's 4 years in Fairbanks, Alaska, she rose through the ranks of Eielson AFB Child Care, until becoming Director with hundreds of children in her care.

One of her most fond and humorous stories was during a family vacation traveling in a converted camper pickup truck.  Her husband spotted a bear near the tree line; he got out with his rifle determined to get that bear. The bear had another idea. While the family waited impatiently and with the 3 kids in the back of the camper, they realized that the bear was on his hind legs peering at them through the window. After a loud and impassioned debate, Bobbie decided not to shoot the bear with the .44 Magnum stowed in the glove compartment. Compassion for the bear?  We think it was compassion for her husband who would never have lived down being upstaged by his 110-pound wife.

After relocation to Keesler AFB in 1968, she continued her work as educator at the base's childcare facility.  In 1978, she and her husband bought a childcare facility which she, primarily ran for 50+ years. It was renamed shortly after purchase to Happy Times Learning Center.  It was here that she made her largest and most enduring contributions to the children, parents, and the community as a whole.  In her later life, she was constantly approached and thanked by a mom, with kids in tow, that she had taught decades earlier.

She retired in 2008 after which she focused on her church, Grace Memorial Baptist Church, and various outreach programs.  It was here and for the rest of her life that she became known as "Miss Bobbie" and the phrase, "everyone loves Miss Bobbie", became a given and was embraced by all touched by her life.  She was a humble and faithful servant of the Lord.  She was a Prayer Warrior who called upon the Lord on behalf of those in need. She was a long-time member of the J.O.Y Group (widows) and Inspirations.  She served her church as a choir member and participated, as long as she could in children's activities.  Until she could no longer drive, she spent many hours with the homebound and in various nursing homes.  She was unwavering and resolute in her belief in God and in the innate decency of people.  She was slow to anger, quick to apologize and always gracious.  She met her last challenge as she had done with all others before, with courage, love, and faith.  She Did Not Blink.

So, for those many of us who Love Miss Bobbie, with hearts breaking, we say good-bye; but, only for this moment... for CHRIST IS RISEN!

Please visit www.riemannfamily.com where you can share memories and photos.

To order memorial trees or send flowers to the family in memory of Bobbie Mosley, please visit our flower store.