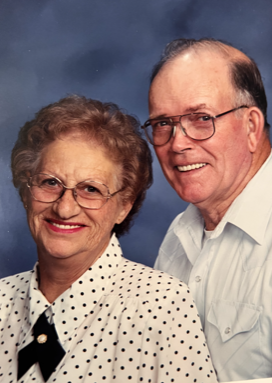 Betty was born in Saucier, MS. on May 7, 1932. She spent her early life growing up in the Advance community in Northwest Harrison County. She was married to the love of her life, Lynn Sanderson, on September 16, 1950.  They spent the majority of their life living along the Gulf Coast from Long Beach to Pascagoula.  She worked as a seamstress in the garment industry in her early years and became a stay home mom and homemaker for the remainder of her life. As their two children grew into adults she enjoyed traveling with her husband seeing various parts of the country as he traveled with his career in construction and petroleum industry.   She enjoyed fishing, arts & crafts, spending time with her grandchildren and great grandchildren. She was a very outgoing person and never met a stranger and enjoyed the lifelong friendships she had made here on the Gulf Coast as well as other parts of the country. She was a member of Galilee Missionary Baptist Church in the Advance Community.

She is preceded in death by her loving husband of 59 years Lynn Sanderson; her parents, Arthur and Viola Ladner; brother, A L Ladner; grandson, Corey Jeanfreau.

Visitation will be on Saturday, August 20, 2022, from 10 – 11 am at Galilee Missionary Baptist Church, Saucier, MS. The funeral service will be at 11 am in the church. Interment will be in the church cemetery.

To order memorial trees or send flowers to the family in memory of Betty Sanderson, please visit our flower store.